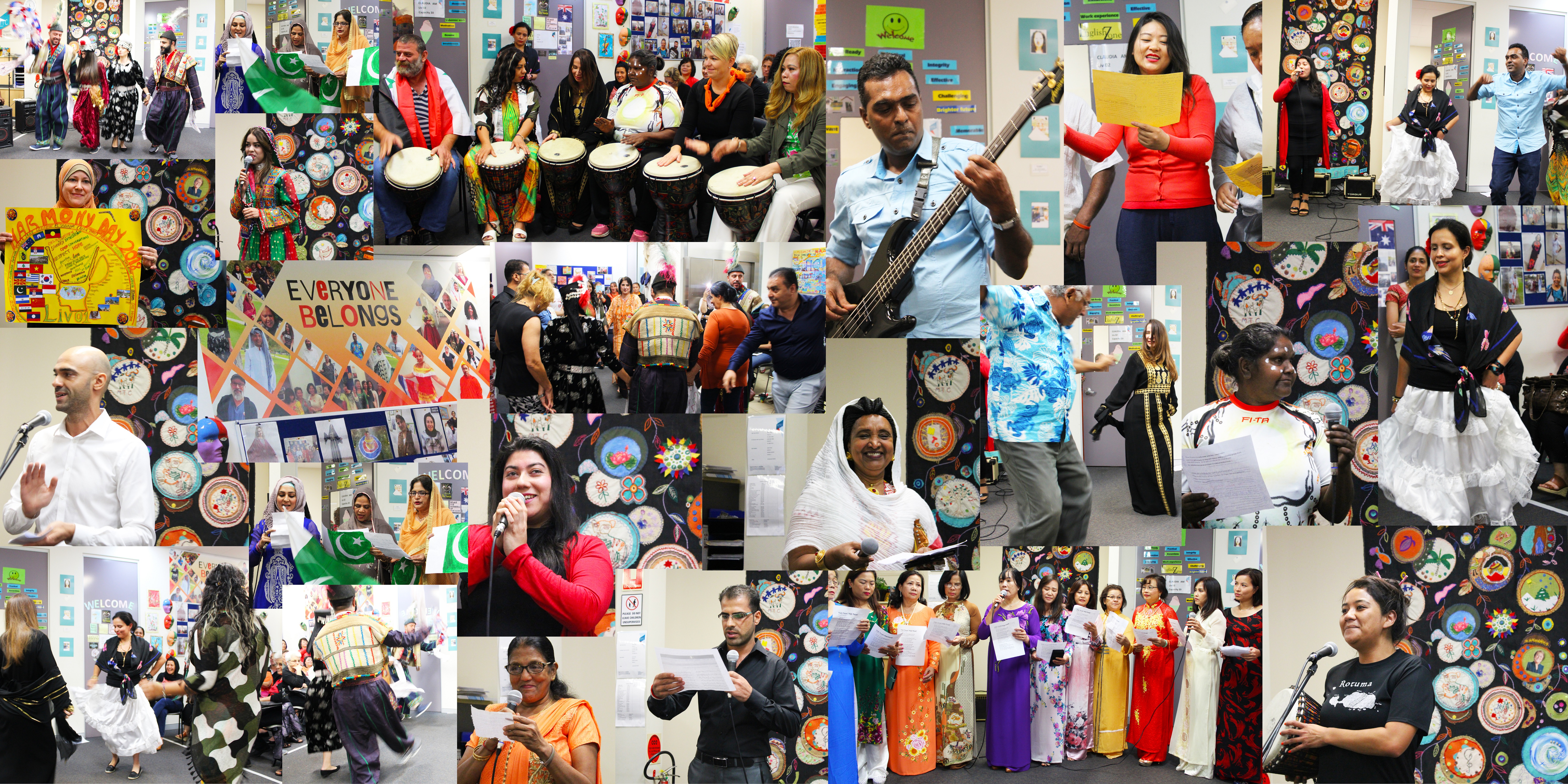 Harmony Day at MTC Liverpool was a wonderful mix of cultures, languages and stories from across the globe.

The annual Harmony Day celebration at MTC Liverpool was a spectacular cacophony of colour and movement. SEE (Skills for Education and Employment) students came dressed in traditional outfits from their cultures, raising their voices to belt out the songs of a dozen nations.

The two-hour performance began with an acknowledgement to the traditional owners of the land, then SEE Regional Manager Subhi Madi gave a heartfelt speech thanking the students for their participation. “You have all come here to study, learn and make the most of your opportunities. I’m honoured to see you all here in your traditional outfits, coming together as one through music,” he said. “I hope that you will keep on with your journeys.”

He then went on to recognise the woman responsible for bringing everyone together, SEE Centre Manager at MTC Liverpool Jacqueline Druart. “It’s impossible to keep track of everything Jacquie does for her students,” he said. “It’s a privilege and a blessing to work with her.”

Judith Kay, of the Bundjalung people, did an excellent job as the MC. “Harmony Day is about coming together to celebrate local diversity and to spread the message that everyone belongs,” she said. “It creates an opportunity to think, talk about and recognise how our differences and our similarities make Australia a great place to live.”

The performers and audience were a United Nations conference on a smaller scale, with people from Vietnamese, Chinese, Pakistani, Arabic, Fijian, Ethiopian and Bangladeshi cultures present – and that was just half the room.

Listeners were treated to a Fijian pop duo, Assyrian native dancing, a poem in Arabic, a six-person drum circle, and lots more.

Drum circle leader Lily Wong is of mixed Polynesian and Chinese heritage, and a Youth Advisor in the Youth Frontiers mentoring program. She selected a Polynesian song for the demonstration called ‘Au’s Noa’ia’, significant to her Rotuman culture and often played at festive gatherings.

Lily explained that drums can be used to express emotions and unite a group of strangers. “By asking one volunteer to drum a particular beat while the others drummed a different beat simultaneously, we are able to demonstrate we can maintain our own individuality and still work harmoniously with others and belong to a community,” she said.

MTC’s Youth Advisors use drums to help kids communicate when they’re feeling intimidated or unsure about speaking up, via initiatives like the 10-week DRUMBEAT (Discovering Relationships Using Music, Emotions, Attitudes and Thoughts) program. “It’s fun, loud and engaging which the kids love. It’s also a great way for them to participate in some meaningful and thought-provoking discussions in a less confronting way,” Lily said. “The beauty of it is that anyone can participate and still benefit.”

In the audience enjoying the spectacle was receptionist Theresa Barnett, who has been with MTC for almost nine years. She says that in that time she’s seen a lot of people come through the doors. “We have photos displayed all over the walls of past students who’ve gone on to find paid employment,” she explained. “They always have something really nice to say about the MTC Liverpool staff, which is really encouraging – it shows us that we really make a difference.”