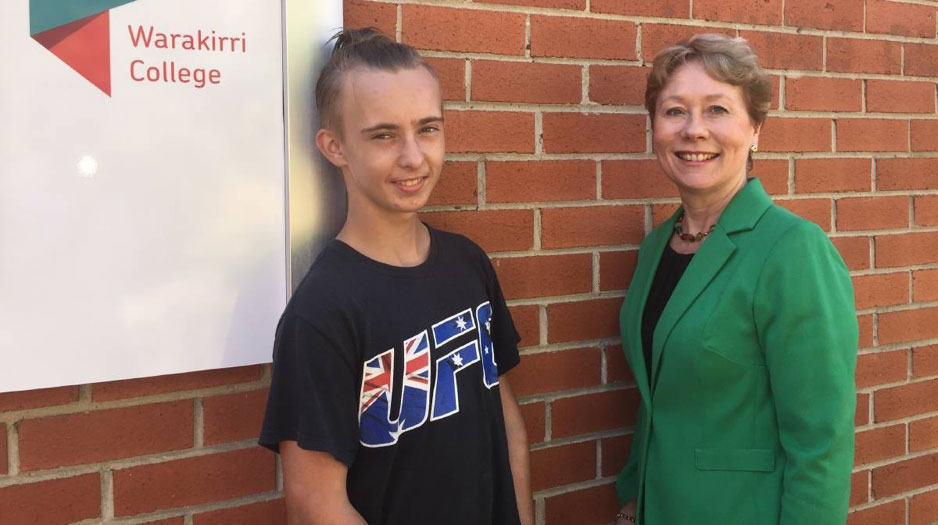 When bullying forced Nathan Collins to leave school after year nine, he thought his job at McDonald’s was the extent of his career options.

Now the Penrith teenager has his eyes set on starting his own business thanks to a new school in Blacktown.

Warakirri College was officially opened by NSW Deputy Premier John Barilaro this week, on the grounds of the Blacktown TAFE northern campus.

Principal Carolyn Blanden said the deputy premier had ensured the college has a “magnificent” relationship with TAFE NSW, which would help ease students’ transition to tertiary education.

The college name means “to stand or grow” in an Aboriginal Australian language.

“That’s what we do, we help people stand and face their challenges,” Ms Blanden said.

“Kids need a place to be. Somewhere they can express themselves.”

The college is an initiative of MTC Australia, a social enterprise that connects young people with employment and training, and started with a Fairfield campus in 2007.

It caters to students aged 15-22 who have dropped out of mainstream schools for a wide variety of reasons, including mental health issues, social disadvantage, a history of drug abuse, and contact with the juvenile justice system.

They also have a small number of refugee students who may have gone many years without formal education.

There are no tuition fees, and the college covers other expenses including resources, excursions and lunch.

Ms Blanden, who previously worked in high-fee private schools, described it as “a chance for a fresh start”.

“It’s most rewarding work I think I’ve ever done.”

“The knowledge and understanding is there,” she said. “There are different ways of assessing kids so they can show you what they know.”

Nathan Collins, 15, said he has benefited from the trust and responsibility placed in him.

“You’ve got a lot of freedom,” he said. “You’re not always trapped in a box.”

“The teachers are all really laid back and nice to you. There’s more one-on-one time. The other kids are not distracting you and mucking up.”

Nathan is passionate about filmography and extreme sports.

At 15 he has already organised two skate competitions, which each attracted hundreds of competitors, and worked with some of Australia’s professional skaters.

His dream is to study event management at TAFE while he completes his HSC, and one day start his own action sports events business.